Of course, the day I decide to wear a sundress with the intention of keeping a sweater on over it is the day the HVAC system in my building is on the fritz. So I am roasting and that is doing nothing to help the overwhelming exhaustion I am feeling right now. It is the first trimester all over again. Yesterday, I took a 3 hour nap and still managed to fall asleep shortly after 9 last night. Only to feel like I needed a couple of more hours when the alarm went off this morning. I hope this passes. I hope I'm not getting sick.

In other news, the pounds are coming on. I am ravenous and it is what it is. I am trying to make healthy choices but I don't always succeed. The worst is when I don't bring enough food to work and end up having no options other than the vending machine. It doesn't help that people are always offering me sweet treats. Their way of helping to fatten up the pregnant chick. I'm trying though. Still need to find some time and energy for some exercise.

Only 3 weeks until the big ultrasound to find out the sex of the baby. It seems like forever!

Let's face it. I'm not talking about much these days besides my pregnancy so I've temporarily replaced the title of the blog to reflect that. I may still post about other things as the spirit moves me (and fall inspires me).
Posted by Laura at 10:54 AM No comments: 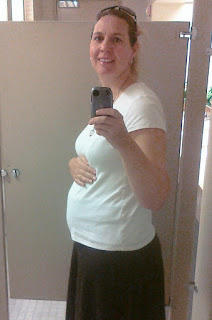 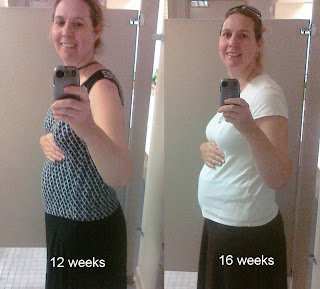 Slowly but sure the belly is rounding out and getting bigger. Side by side, you can really tell the difference. I tried to wear that black and white shirt last week and it was not a good look. I'm fully in maternity shirts now. Still not noticeable to a stranger though. Given the size of my ass it will be a while before my belly looks out of proportion.

I weighed in lower this week than I did last week. I think that is mostly because last weeks weight was inflated. I happy with my weight gain though. 4 pounds at 16 weeks is pretty good. Last pregnancy I was pushing 10 lbs by now. My eating has been pretty good. Not perfect by any means, but I am conscious of what I am eating and I'm not considering the baby in my belly to be a license to eat.

Now that the weather has decreased from "surface of the sun" hot to merely "interior of a volcano" hot, I have been getting out and doing some more walking. Usually, I have passenger in the stroller who decides about halfway that she wants to walk and help push. That slows me down but at least I'm still covering some distance. I've also managed a little prenatal yoga.

4 weeks until we find out the sex of this little one. I can not wait. I am getting so itchy to do some shopping for this little guy or girl.
Posted by Laura at 7:27 PM No comments:

For anyone who doesn't know the birth story for my daughter, the quick version goes like this: 4 days of induction resulting in less than 3cm dilation and a c-section. 6 nights in hospital, 2.5 hours before I held baby for first time, 5 days for my milk to come in. The long version is here.

It was not the nicely medicated, textbook birth that I had envisioned. I honestly didn't give the possibility of a c-section any thought because if there is one thing the women in my family can do well it is push out babies.  I secretly thought that if I really wanted to I could do it without an epidural. That's how badass at delivering I thought I would be.

But now I have a second chance. At my first doctor's appointment this pregnancy at 7 weeks, my doctor brought up the possibility of a VBAC. I said I couldn't think that far into the future. And that was true, at that point I was only focused on the keeping the little pea sized embryo in it's cozy home through the first trimester.

Now that I have managed that goal, I have begun thinking about how I'm going to get this kid out of me when the time comes. I previously thought that you couldn't go overdue and still have a VBAC, but I was wrong. That really opens up the door for me (I can't envision me going into labor before 420 weeks). The more I think about it and research it, I really, really want this).

This gives me a little added motivation to limit my weight gain and work on toning on flexibility. Excess weight can hinder chances for a successful VBAC and extra muscle is useful for pushing large parasites out of your ladyhole.

So that's my goal for February. That mean accepting that I likely won't have a baby before my 39th birthday on the 11th. It means considering my due date to be February 20th instead of the 6th. It means 6 months of worrying that maybe my body doesn't know how to go into labor. And 6 months of hoping that it does. 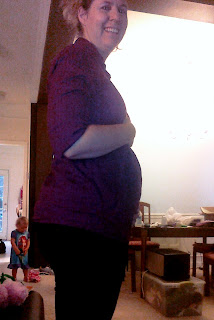 As you can see I finally got Scott to take the photo. The results are no less heinous. How many chins are there. But check out that cute little munchkin in the background.

I had my monthly OB check this morning. Everything is as it should be. The heartrate was a nice strong 160. For the second time this pregnancy the dr. commented on how my uterus was really tilted waaay back. I never heard anything about this in my first pregnancy. Is it possible she put it back in wrong after my c-section. (I kid, I kid).

Their scale had me up 6lbs from last appt. I would be freaking out except a) I ate a lot of salt yesterday- pickles and movie theater popcorn (not together) b) I think my last weight was artificially low due to some dehydration. They have me at a net gain of 4lbs, which isn't too bad at 15 weeks.


I think I'm feeling a little dancing from this little one. There is nothing like feeling your baby move inside you. When I was pregnant with Caroline every movement excited me, it never ever got old. I'm really looking forward to feeling more from this little guy. I say guy because right now I'm feeling like it is a boy. That is based on absolutely nothing though. Next week I may think it is a girl. I won't know for sure for 5 more long weeks.

How Far Along: 14 Weeks
Symptoms: An unwelcome return of the nausea
Showing?: Yes. To anyone who knows what they are looking for.
Weight Gain: About 3 lbs
Milestones: Um nothing right now really.
Man, all the weight I didn't gain is finding me now. This baby loves, loves, loves the carbs. I can't tell you how many potatoes I eat in a week. It does not love meat. The thought of meat, especially at lunch time just makes my stomach churn. So I find myself on a high carb, low protein diet that is a perfect recipe for weight gain. (This baby also loves watermelon and cheese. Not together.)

I need to sit down and do some serious meal planning for lunch to ensure that I get some protein. I'm seeing a lot of beans and rice in my future.

Exercise still isn't happening. I tried to take Caroline for a long walk down on the C&amp;O Tow Path on Saturday but it was a disaster. She whined the whole time and we ended up covering about a mile in 40 minutes. Not a  fitness walk for sure.  Scott in the meantime managed to get a 4 mile run in so at least someone in the family is on the fitness path.

I am biding my time until September when the weather should break a little and hopefully I can at least do some walking.

How can I miss you if you don't go away

I was making progress. It wasn't rapid but it was progress. I was getting to my goal and it has been very hard for me to put that on hold.

I love being pregnant. I am excited for the baby. But I wasn't where I wanted to be physically before I got pregnant again. I wanted to have a thin pregnancy but once again I am a fat, pregnant lady. But I'm 38, we couldn't wait around before this pregnancy. My eggs were aging daily. So this is where I am. I'm trying to maintain the momentum I had in the spring by keeping my weight gain under control, but moderate weight gain is actually much more challenging to me than weight loss. I'm an all or nothing kind of girl.


I keep thinking what if. What if I had stuck with Weight Watchers last year? I could have been at a normal BMI by the time I got pregnant. What if I just hadn't gained the weight I lost on WW back? I could have started this pregnancy 12 lbs lighter. 195 instead of 207. Would that have made a huge difference? No, but 12 pounds is 12 pounds. What if I had not gained so much weight in my first pregnancy? What if a unicorn could come and magically make me skinny with just a round belly. What if? What if? What if?

There is no point to this. It's really not worth dwelling on it. But I found myself explaining to some SparkFriends why I hadn't been around and realized that I'm jealous. I'm jealous watching them work on their weight while I'm in a holding pattern.

I'm not down about it. I don't want this to come off that way. I miss the weight loss high but I'll be back in the game next spring.
Posted by Laura at 7:10 PM No comments:

How Far Along: 13 Weeks
Symptoms: This week for the first time my breasts are hurting, I have a metallic taste in my mouth. And I have been peeing like a Russian racehorse (that's not new but seems to have amped up)
Showing?: This baby is beginning to make itself known to the world. Though I really just look fat.
Weight Gain: 2 lbs as of this morning.
Milestones: I'm in the second trimester!

Heeelllloooo, second trimester. So good to see you. I am very happy to bid good riddance to your evil sibling the first trimester.  Now, let's just pause for a while. I would like to hang out here in the middle indefinitely. It's not that I don't want to meet this baby, but I am scared of the changes (excited and scared all at the same time). I'm scared of having less of me to give to Caroline. To Scott. To everything. I'm scared of the sleepless nights. I'm scared of the all consuming nature of newborns. But I am excited. What is sweeter than a newborn baby? Nothing. That's what.

So 2T, let's hang out for a while. I'll enjoy this happy stage of pregnancy and get used to the idea of what's ahead. You just hang in there and keep the weight gain under control- your love of carbs and aversion to meat is going to be a problem.
Posted by Laura at 7:52 PM No comments:

I count my calories on myfitnesspal

Laura
Former old-maid turned wife and mother. I work full-time and parent full-time. I am completely unartistic and have no attention to detail, yet i like to try to be crafty. Let's see what kind of damage I can do!