Aches, pains and other: This baby is all up in my ribs. In fact, it feels like he is stretched out like an upside down Vitruvian man. I don't know how he can be in so many places at once. 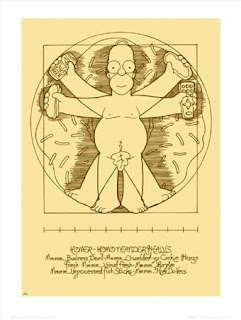 I also ache from just below my ribs to below my hips. Every muscle in that area feels like it has been subjected to an extreme workout. I guess it has from the inside out. 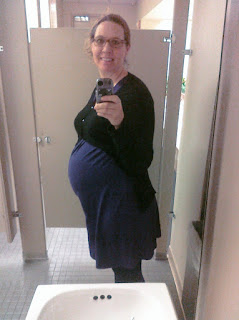 Dat belleh is gettin' big! And I feel every bit of it. Extreme over indulgence over the Thanksgiving holiday weekend did nothing to help the situation.

In theory, I only have about 10 weeks to go (yikes), in reality it's more like 11.5 or so. I should really get on buying this child some clothes, blankets, etc but there are just so many other things to buy this time of year. Also, we are having another ultrasound at 32 weeks and I kind of want another confirmation that there is indeed a penis in there before I spend money on blue. I have looked at my 20 week u/s pictures a million times and I still can't see what the tech saw. With my daughter it was clear and I knew before the tech even said it out loud.

Standard OB appointment this morning. All is well with the babe and best of all I got confirmation that I do not have gestational diabetes. I was assuming that no news was good news but it is nice to have the confirmation. Especially when it is 3 days until Thanksgiving and there is dressing, mashed potatoes, rolls adn pumpkin cheesecake to be consumed. The bad/good news, the baby has moved way up and now my stomach capacity is way down. Good for controlling weight gain, bad for filling up on Thanksgiving deliciousness. First world problems.
Posted by Laura at 5:00 PM No comments:

Aches, pains and other: Just my back still. Every night I end the day by taking and bath a putting a heating pad on my back. The flashes of sciatica are coming more frequently. I am afraid. Very afraid.

Milestones: Officially in the third trimester by any standards. 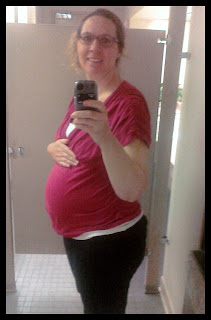 I clearly didn't pull out all the stops when getting dress this morning. I can't believe how short this shirt is already. I also can't believe I still have 12ish weeks of growing left to do.

Amazingly, this week, despite eating crappy most of the time, I actually didn't gain much. About .8 pounds. Which is about normal but for me that is an almost negligible weight gain. Maybe, maybe, maybe, my body has finished with the massive preloading of fat for the little guys final growth push.

Honestly, I am just about to the point that I don't care about the weight gain anymore but I'm not 100% there yet. I still worry about weighing in at the doctors and showing a 5 pound gain in a 2 weeks. But Thanksgiving is coming up so, you know.

In other baby preparation news, we finished painting the new nursery and will be moving all the furniture in next weekend. I am very worried about messing with Caroline's sleep but we don't have a choice. 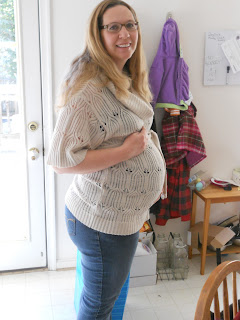 Aches, pains and other: My back is starting to ache at the end of the day so I'm taking baths every night. I assume this will continue until February. More concerning is that I occasionally get a second of the sciatica that brought me to my knees at the end of my last pregnancy. I am terrified of that coming back.

Milestones: 85% chance of survival if he was born today. ::knock on wood::

This picture is actually from Saturday but I decided to put up a picture that proves I can actually look decent and don't always look like hammered shit.

27 weeks!! By some guidelines that is the third trimester. I generally consider 28 weeks to be the start of the 3T though, so I have one more week to go.

I had an OB appointment this morning that included my glucose challenge to test for gestational diabetes but did not include any mention from my doctor about the fact that for the second month in a row I gained 8 freaking pounds. I guess they know that pregnancy weight gain has it's own pattern for everyone. I'm onto appointments every 2 weeks now and that really hit home that I am no longer newly pregnant but actually entering late pregnancy. Holy Moly!

The appointment also included a real discussion on my decision to VBAC. He is so supportive and encouraging. He told me that they won't put a deadline on me and that we won't even start discussing Plan B until at least 41 weeks. He gave me a 60-80% chance of success if I go into labor on my own.

I am so encouraged. I've read so many stories from women who's OB's are not at all supportive of their decision to VBAC and do everything to set them up for failure. Given that my OBs let me try to induce for 4 days last time around before calling for the knife, I truly believe that they understand that vaginal birth is the most preferable choice.

I still have so much to do. The baby has almost no clothing. I still need to sign up for the newborn diaper rental, my toddler needs a new bed so that the baby can have a crib. We need a new stroller but that is a post in itself.

It's been three years

Since I put on this dress 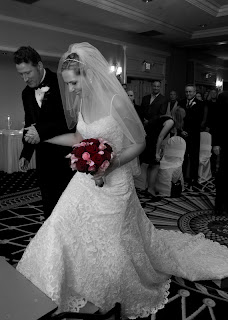 And said I do to the best man I have ever known. 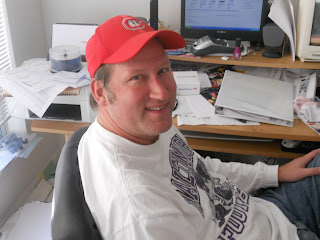 Neither of us is always perfect but we are perfect for each other. Although, most days I don't think I deserve such a sweet, supportive man. I don't take for granted how lucky I am.

Email ThisBlogThis!Share to TwitterShare to FacebookShare to Pinterest
Labels: Marriage

Con-artists have nothing on toddlers

At almost two, my daughter has taken an interest in the potty. While I would hardly say she is potty training, she likes to sit on the potty and a few times the timing has been right when she is sitting there. Once she even told me ahead of time and we got to the potty in time for her to pee. But for the most part, peeing is done in the diaper and that seems just fine with her.

So why on earth was I sitting in the bathroom with a naked toddler who was on a frog potty at 4:00 AM this morning? Because she conned me, that's why.

Me: What did she just say?
Scott: Grmph, huuh. Zzzzzz
Caroline: I go pee pee on potty (louder, this time)
Me: She said she wants to pee pee on the potty. Can she be serious?
Scott: Zzzzzz zzzzzzz
Me: I know she is lying but I'm going to do it anyway, just in case.

So I stumbled to her room, pulled her out of bed, stripped off her footie pajamas and diaper, and put her naked on the froggy potty. She sat there, we sang a song and nothing was deposited into the potty. It didn't matter though. She had achieved her real goal.

Mommy was up and she was naked. Life was good.

Last October 31st my daughter was just under 10 months old, not walking and certainly not eating candy yet, so we never considered taking her trick-or-treating. She just crawled to the door and smiled at all the kids and gummed the credenza. Being the ridiculous person that I am, I did buy her a costume. And it was, of course, ridiculous. But adorable. 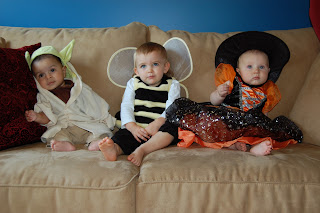 That's my little witch on the right. The costume was over the top and of course Caroline hated it. But my God it was cute.

This year, being full-fledged, card-carrying toddler meant Caroline got to go trick or treating for the first time. I was determined not to be insane when I picked out a costume. As much as I loved the froo froo Tinkerbell costume, I knew it would be cold on Halloween night and a coat would simply not go over Tinkerbell's wings. Yes, I am the Mom who makes her kid wear a coat over her Halloween costume. It snowed two days before Halloween here, People. Anyway, I poured over the costume catalogs and after consulting Scott, decided she would be an adorable gnome. 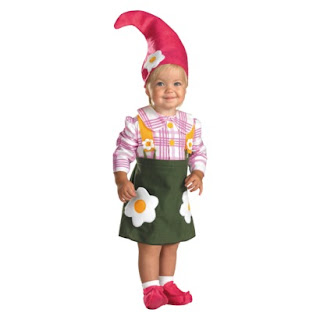 Adorable, yet not too hindering or obnoxious. Right?

Of course, my child hated it. 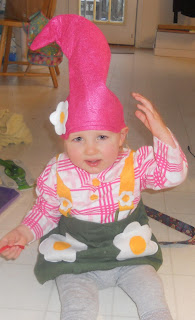 By the time we left the house, there was no hat and no cute little shoe covers. But there was an awesome pumpkin. (The only Jack-o-lantern in our house actually, because some of us never found time to actually carve the pumpkins we bought weeks ago). 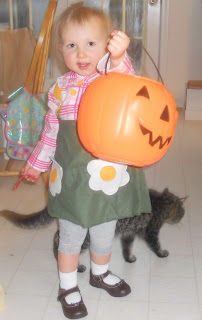 It didn't matter though, she was all over the trick-or-treating. My formerly shy little monkey, went right up to the doors and showed no hesitation taking candy from strangers.

It was going great until a zombie/monster type thing opened their door and Caroline promptly lost her shit. That was the end of trick-or-treating and the beginning of a very long crying freak out. I was afraid she would be scared to go to sleep or have nightmares, but neither was a problem. The crying was stopped by introducing her to the wonderful world of lollipops.  Sugar is a cure all.

My fears that she was traumatized by it all were for nothing as last night, she tried to go trick-or-treating again.
Posted by Laura at 8:21 PM No comments:

I count my calories on myfitnesspal

Laura
Former old-maid turned wife and mother. I work full-time and parent full-time. I am completely unartistic and have no attention to detail, yet i like to try to be crafty. Let's see what kind of damage I can do!